A1A Auto Care May Be The Worst Auto Repair Business in Rockledge or Surrounding Areas of Brevard County, Florida!

After taking my vehicle to A1A Auto Care at Flypark Drive in Rockledge, my recommendation is to avoid A1A Auto Care if you value your vehicle, wallet, or sanity. After making the mistake of entrusting my Jeep to Dan, the experience has proven to me that this is the worst place to take a vehicle for repairs anywhere in Brevard County. If it were possible to give a negative 5 star review, I would certainly feel this business qualifies.

A Little History About My Experience:

I brought my Jeep Cherokee which had suddenly started idling rough and coming up with a misfire code to A1A Auto Care after 2 shops had already gone through the diagnostic procedures and had found that there was low compression in one cylinder. The engine is a re manufactured engine and still under warranty. Eagle Engines needed to have specific tests done and I discussed the issue with Dan.

Dan said he could disconnect the exhaust as requested by Eagle Engines to determine if there was exhaust blockage in the catalytic converters contributing to the misfire and low compression. He stated that he could do that in a half-hour and that based on those results, he would work with Eagle Engines to determine the best course of action. The Jeep was left with him for repairs.

What Dan Mardosa Did Instead of Performing the Requested Work:

Instead of doing as requested, Dan decided over the weekend that my problem was probably a vacuum leak. He was determined to “smoke test” the vehicle and find my leak and never bothered to do the work requested. Subsequently, he was “certain” that the problem was a $500 throttle body he supposedly saw a small amount of smoke coming from during testing.

Despite my insistence that this did not match the symptoms, and certainly would not cause the low compression, Dan was determined to replace the part. I was not willing to authorize the repair and was also concerned because our phone discussions did not match the estimate he presented. He had added no less than an hour more labor than discussed. He then stated that he was so sure this was the problem, that if the part did not fix my problems, he would put my part back on and not charge me for the repair.

The Kind of Repair A1A Provided:

A few days later, Dan said my vehicle was ready, but after I paid for it, I noticed it was still running rough and told him that it did not seem any different. Dan said it needed carbon blown out an to just take it on the highway and rev it up at highway speeds. I drove off and within 30 minutes, the same check engine light was on and it was running every bit as bad as before. I called Dan and brought the car back in the next morning at 6 AM (presumably to re-install my part and refund my credit card for the “repair”).

What Dan Mardosa Did Instead of Honoring His Agreement:

Dan proceeded to chase elusive imaginary vacuum leaks for another 3 or 4 days when I finally gave up and demanded he do as agreed by re-installing my part along with the agreed refund. Dan at first tried to say he only said that it would fix the small leak he claimed to find, but I strongly reminded him that he said “it would fix my problem” and anything else was a lie. Putting on an expensive part not authorized to “fix” some imaginary leak which in some scenario “might” fix my vehicle was not in any way what we discussed.

Dan’s answer to this was to put my part back on and then create an entirely new additional bill for chasing his tail around which was labor and parts he broke along the way. The bill was even more than the part cost for his first misdiagnosis and he still charged for the labor of putting that part on in the first place. Then he said we could “just call it even”, left my Jeep outside with the keys in the gas tank door, and said I could pick it up.

The Incompetent Quality of Work Dan Mardosa Did:

After returning the vehicle to my home, I found that Dan Mardosa of A1A Auto Care had destroyed multiple OEM fittings, stripped back injector harness wires, broken Oxygen sensor fitting, installed multiple hose clamps, left under carriage cables disconnected, and bent the aluminum fuel line to a sharp 90 degree angle (limiting fuel supply and un-repairable). He also installed a rubber fuel hose on the valve cover PCV fitting along with a hose clamp which he mounted the fitting is such a manner that when he closed my hood, he dented it from the inside out.

This review doesn’t require you to take my word for it. I have attached a few photos of the work quality and damage Dan did to my vehicle. These photos only show a few of the things he damaged while working on my vehicle, but give you a good idea of what you can expect from A1A. You can click on the images below to see them in greater detail. 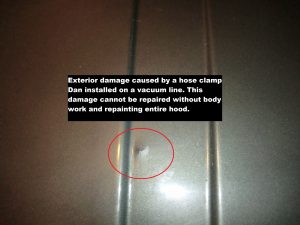 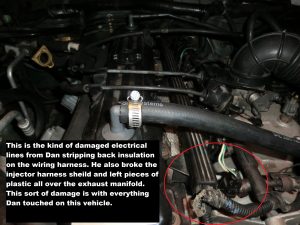 The results of Dan Mardosa “diagnosing” my vehicle. He destroyed the harness assembly. 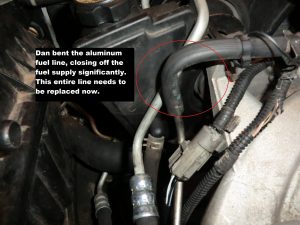 Fuel line with aluminum tubing which Dan bent by accident to a 90 degree angle. 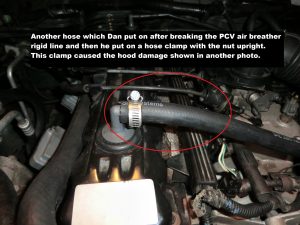 Hose clamp installed by Dan which subsequently damaged my hood when he closed it. 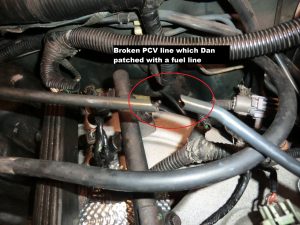 Rigid PCV line broken when A1A Auto Care was working on my vehicle.

The hood is going to cost more than $500 alone to fix since the paint is actually cracked and not simply a ding. It will require repairing, filling, sanding, priming, painting, clear-coating to restore to the pre-A1A Auto Care condition. The fuel line is approximately $200 for part alone, and the other parts add up to about $125 to replace those parts he damaged. This does not even take into account the labor on part replacements.

Make Your Own Determination About A1A Auto Care Work Quality:

There’s no need to take my word for this sloppy repair work (reckless being a better word by my book). I am providing photos for your benefit. Not all the damage is visible, but you can see the level of poor quality work Dan Mardosa performs. If you think you would like to take your $30,000 plus vehicle to A1A Auto Care, just be ready to get a lot more repaired after than you started with along with failure to repair it in the first place.

If you decide to use A1A Auto Care for service on your vehicle despite this review, my recommendation is to ensure each and every thing is in writing and clearly stated. You might want to get another shop check it out after as well since by this contributor’s experience, he breaks a lot and has very poor abilities.

I don’t know if Dan Mardosa has ASE certification, but would be very surprised if so. The work done by him is the worst I have ever seen in more than 40 years of vehicle ownership. Even my repairs of the first vehicle I owned at age 16 were of much higher standards.

This charge was disputed, and the card member services presented with the “additional” invoices. Also, emails where Dan Mardosa clearly stated items which he fails to disclose in his dispute response were provided. The response provided by Dan are in keeping with the dishonest man I dealt with. He will not honor his word, and further… he has created invoices or other items to avoid even returning the money he got, let alone repay for his damages along the way.

Why Space Coast Florida is Publishing This Review of A1A Auto Care:

At Spacecoast-florida.com, we feel it is important to showcase some of the unique or notable businesses our residents may want to check out. It is our goal to provide useful links to local services and other information about Brevard County. We also feel it is important to make information available so that Brevard County residents can make informed decisions when businesses cross the line of simply not performing well.  If a business clearly engages in untrustworthy activities and performs work as poorly as A1A Auto Care, we feel inclined to advise others of our experience.

A1A Auto Care (owned and operated by Dan Mardosa) is a business we feel should be avoided at all costs, but we hope that the information provided here can help you decide for yourself. If the quality of work and the level of honesty he has exhibited with my experience is what you are comfortable with, they may be the auto repair place for you to take your business. There are other places to take your vehicle, and let me assure you that I and my friends will not be going to A1A Auto Care.