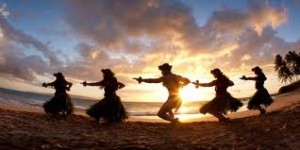 Space Coast visitors and residents who would like a bit of a Polynesian flavor added to their Florida tropical experience should take a minute to check out this unusual business in Brevard.  Even those who may not be comfortable performing can still take advantage of participating in the experience of Hula.

The following article is provided in part by Brevard Hawaiian Dancers regarding their recent competition win.  Additional links are provided for those Space Coast Florida visitors to contact them or learn more about this out of the ordinary Space Coast business. 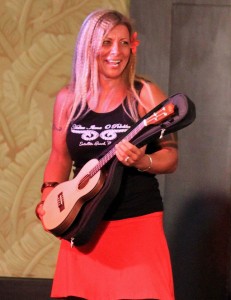 The spirit of Aloha was in the air at the Wyndham hotel on International Drive in Orlando this weekend where the 2013 Ho’ike competition was held on Saturday and Sunday. This is the 16th annual Hula Competition in Florida that attracts Halaus (Hawaiian Dance Schools) from Florida, Texas, Virginia, Hawaii and as far away as Japan. Brevard county was represented in the competition by Halau ‘Ilima o Pololika, short for Halau Pulama Mau Ke Aloha Ka ‘Ohana ‘Ilima Pololika, meaning Florida hula school to cherish and perpetuate always with love the family `Ilima.

This school is ever expanding and is led by Chrissy Sulfridge who opened her studio in Satellite Beach a mere two years ago.  Dancing since she was a small infant, the traditions and cultures of the Hawaiian and Polynesian people have always been a huge part of her life. For many years, Ms. Sulfridge attended Kumus (Polynesian dance teacher) seminars and danced in hundreds of Hawaiian and Polynesian shows. In 1992, she was invited to compete in the first World Hula Competition held in Honolulu as a soloist and as part of a Halau (school). 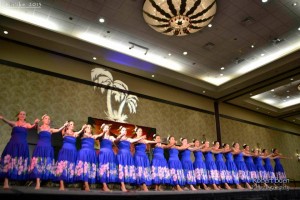 In 2012 Chrissy led her students in an exhibition Hula at the competition in Orlando which inspired her and her students to enter the competition in 2013.  At the time of submission she wasn’t sure which students would be ready to compete but on the day of competition she had 19 Wahine (women) lined up to step on stage.  Since most entries in the Hula ‘Auana category have 6 to 12 competitors on stage some seasoned dancers were concerned that trying to have 19 people in complete synchronous movement would prove to be an impossible task.

In the end Ms. Sulfridge had a vision of an elegant dance that would impress the audience and judges. Her vision became a reality when her students took the stage for a four minute performance that left the audience in awe.

Evidently, she impressed the judges also as her group won the coveted 1st place trophy for the Tahitian Keikis category. 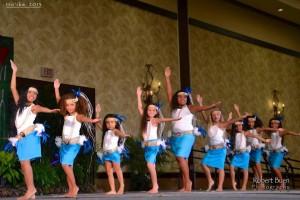 Actors never want to perform with children or animals because they always steal the show and that was the case when Chrissy’s youngest students took the stage in the Tahitian dance competition where they won a first place prize for their exciting performance. As you can see in the photograph, the ages of the Keikis (children) range from 5 to 10. These delightful young girls won a 1st place trophy that included a Tahitian Ukulele. Chrissy recalls that she started her dance career almost as soon as she could walk and she is excited to share her skills with these talented dancers. 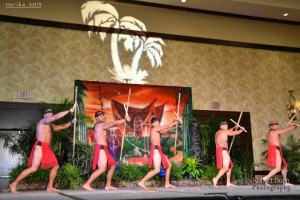 Chrissy also teaches a Kane (men) class and decided to enter her students in the Hula Kahiko which is a traditional Hawaiian Chant competition. The men put on an powerful performance that included traditional costumes and implements. Although the newly formed Kane group did not bring home a trophy, the head judge complimented Kumu Chrissy in her unique choreography for this group and their impressive performance. 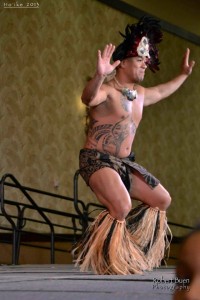 It takes a special attitude and extreme confidence to dance in front of your competitors and one of the male dancers took on this challenge in the Tahitian solo category. This Kane (male) performer took the stage and impressed the audience with his vibrant moves.

Halau ‘Ilima o Pololika offers a variety of traditional Hawaiian dance and Polynesian dance classes, including Hula for all ages including both men and women, Tahitian dance and Hot Hula. Their studio is located Satellite Beach at 716 South Patrick Drive and her class schedule can be found on her Brevard Hawaiian Dancers website. Anyone interested in learning this beautiful dance can contact the studio by phone 321-557-0606 or email brevardhawaiiandancers@gmail.com or uluwehi11@yahoo.com .